Volt has always been committed to fulfilling the potential of our employees because their success is our success. We strive to achieve this by ensuring that all our staff have the same opportunities and support to progress in their career; and to balance more successfully their work and home commitments, through flexible working and other initiatives.

What is the new gender pay gap legislation:

The UK Gender Pay Gap legislation came into effect in April 2017. By measuring and comparing male and female average earnings across all levels of an organisation, it aims to highlight whether there are different career opportunities for men and women, which then lead to different earning levels and therefore a “gap” in the level of pay.

The Gender Pay Gap calculations look at the average earnings of all men and women across the organisation irrespective of role and seniority; and therefore the outcome can be affected by many factors such as working patterns, occupation, industry, and sector.

The legislation aims to ensure that companies focus on doing everything possible to enable women, as well as men, to have the same opportunities and support to progress in their chosen career and to resolve any potential barriers that may stand in the way of that success.

The Gender Pay Gap report is different from the Equal Pay report. Equal pay deals with the pay differences between men and women who carry out the same jobs, similar jobs or work of equal value. It is unlawful to pay people unequally because they are a man or a woman. The gender pay gap shows the differences in the average pay between men and women.

What are companies required to do:

Gender pay reporting requires employers with 250 or more employees to publish statutory calculations every year showing how large the pay gap is between their male and female employees. Companies are required to carry out six calculations and to publish the results on both their own website and the government portal within 12 months.

What does this mean for Volt:

As a medium sized recruitment business, it’s our contractor worker population that brings the company within the requirements to report gender pay based on the new regulation and has the greatest effect on the company’s reported statistics.

Volt is confident that its employees are paid fairly and equally according to the job they do, irrespective of gender, as demonstrated by the 50/50 gender split of our 14 strong European Operational Management Team.

The results submitted to the Government portal and published below are for all Volt Europe Limited headcount as at 5 April 2017.

- Volt is responsible for its own employees’ career development opportunities and pay.

- Our clients are responsible for determining the pay for the temporary workers we place and this can vary widely between different sectors, industries, and job roles.

Volt’s market focus is in STEM (science, technology, and engineering) and these areas, despite industry’s best efforts at redressing the imbalance, have always been male-dominated.

Volt pays the temporary workers on behalf of its clients. As a result, it means we have to include them in our overall figures even though we have no control over what they are paid.

The Gender Pay Gap Legislation requires us to report on the amalgamated figures of these two groups.

The figures below are reported on HM Government’s portal and relate to the 12-month period before the point of analysis on 5 April 2017. 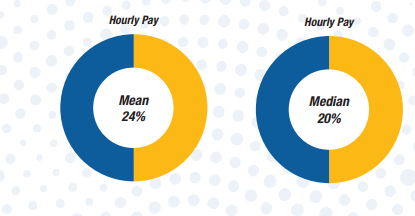 - The Gender Pay Gap shows that the women’s mean hourly rate is 24% lower than men’s.

- The Gender Pay Gap shows that the women’s median hourly rate is 20% lower than men’s.

Mean figure = the difference between the average of mens’ and womens‘ pay.

- The Gender Pay Gap shows that the womens’ mean bonus is 65% lower than mens’.

a. 34% of males received a bonus payment

b. 63% of females received a bonus payment

4. The distribution of males and females between pay band quartiles calculated using the range of hourly pay rates

The Government had determined what elements of remuneration are included in “pay” and “bonus”.

As a result, the following elements of pay can be affected which distort the data:

b. Commission Approximately 1/3 of employees earn commission, which is dependent upon individual performance. Gender does not influence commissions earning ability.

c. Bonus Volt operates a quarterly bonus scheme for one division of its business, and female employees (83%) predominantly staff this division. The quarterly bonus payment dates fall outside of the 5 April 2017 snapshot date. As a result, the calculation of hourly pay for the purposes of Gender Pay Gap reporting does not include any consideration of this bonus pay, whereas commission (paid monthly) is included in the calculation.

a. Commission Approximately 1/3 of employees earn commission, which is dependent upon individual performance. Actual commission payments are used for the calculation irrespective of whether an employee worked full or part-time.

b. Bonus Actual annual bonus payments are used for the calculation irrespective of whether the employee worked full or part-time.

We have a greater percentage of part-time female employees, but the regulations do not allow us to pro-rate these payments into a full-time equivalent, which we believe would go some way to reducing the mean and median bonus gaps.

c. Annual bonus The highest value annual bonus plans are only offered to our most senior employees.

At Volt, we are confident that we pay men and women fairly and equally for doing equivalent jobs across our business. We continue to promote equal opportunity and flexible working; and at all times seek to attract the best candidates to join our organisation regardless of their gender, age, race, etc.